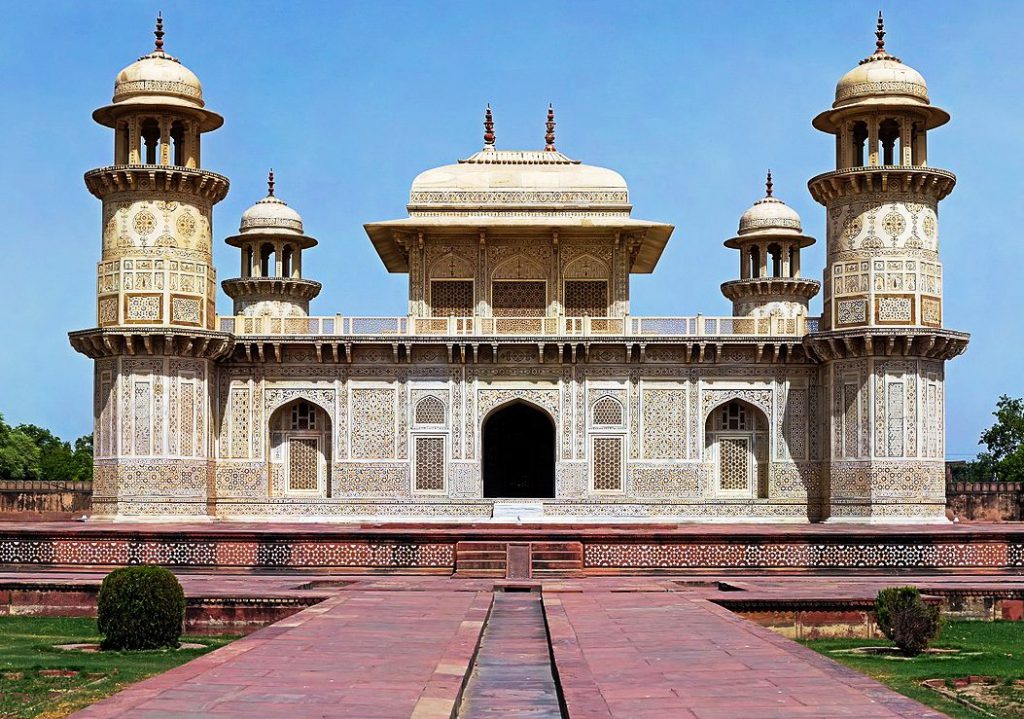 Tomb of Itimad Daula. This is one of the major Mughal landmark monuments situated in Agra

Day 1: New Delhi – Agra: Arrive in New Delhi and straight away drive to Agra. Check into a hotel on arrival in Agra. After some relaxation, go and visit Akbar’s Tomb. Akbar was, in a true sense, the consolidator of Mughal rules in India.

Go and visit Itimad Daula’s Tomb afterwards. This is said to be the building which was precursor of Taj Mahal in India.

Have dinner at one of the restaurants. Overnight in Agra.

Day 2: Agra: After an early breakfast start what people really come for in Agra and what has made it famous in the world; a visit to the new world wonder – the Taj Mahal. Taj Mahal was built by the Mughal Emperor Shahjahan in memory of his beloved wife Mumtaz Mahal. Made in white marble, it is an amazing experience to take a tour of Taj Mahal.

After a tour of Taj Mahal go and visit Red Fort, a fort initially built by Akbar, but where subsequent additions were made by other Mughal rulers. You can very much understand how Mughal administration was run within and from the Fort.

Go and visit a marble workshop in the city. The city does not have marble rocks but it does have craftsmen who are experts in working on marble. Have dinner at one of the restaurants. 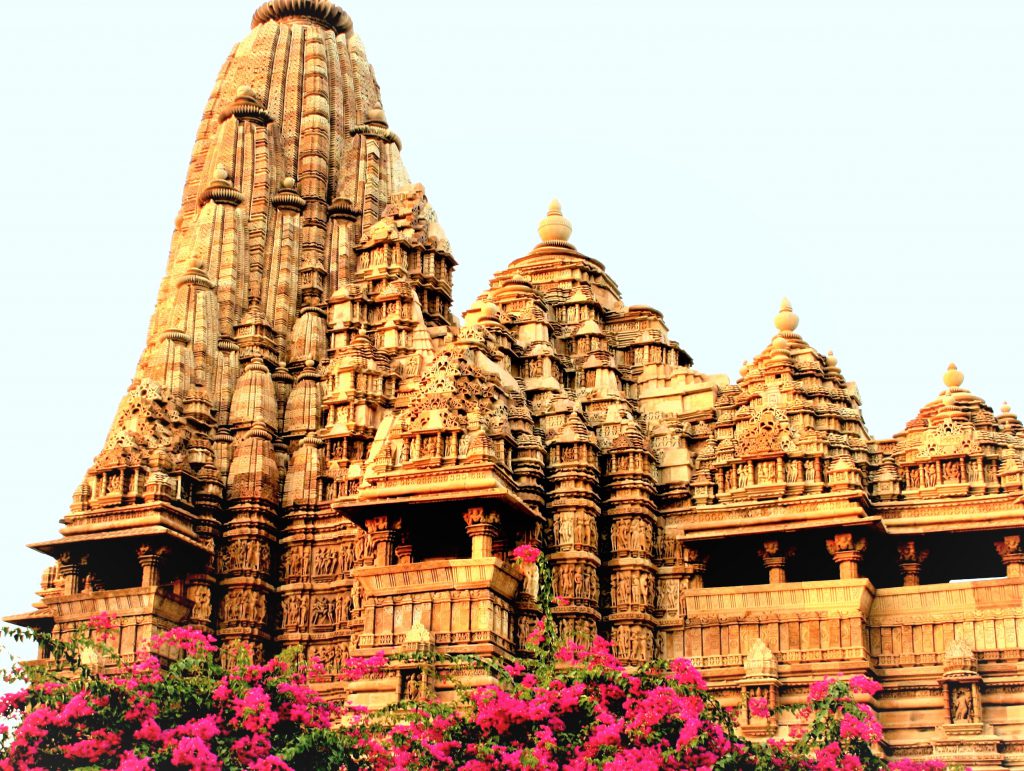 Kandariya Mahadev Temple, Khajuraho: This is the most famous of all the temples in Khajuraho

Day 3: Agra – Orchha: Start after an early breakfast. Drive to the railway station and take a train ride  to reach Jhanshi. From Jhansi drive to Orchha; a drive of just over half an hour.

Check into a hotel and have lunch at a restaurant in Orchha.

Orchha, located in Tikamgarh District of Madhya Pradesh, is situated on the banks of River Betwa. Orchha is said to have been established in 1531 by the Bundela ruler Rudra Pratap Singh.

Visit Orchha Palace  which has quite a few noticeable historical monuments. Jahangir Mahal, Ram Raja Temple and Chaturbhuja Temple are some of those monuments.

There are several cenotaphs (called Chhatris) in Orchha dotting the vicinity of the Fort and River Betwa.

Have dinner at your hotel. Overnight in Orchha.

Day 4: Orchha – Khajuraho: Check out after breakfast and drive to Khajuraho; a drive of a little more than four hours. Check into a hotel on arrival in Khajuraho.

Watch the Light and Sound show in the evening. Return to the hotel afterwards, and have dinner. Overnight in Khajuraho. 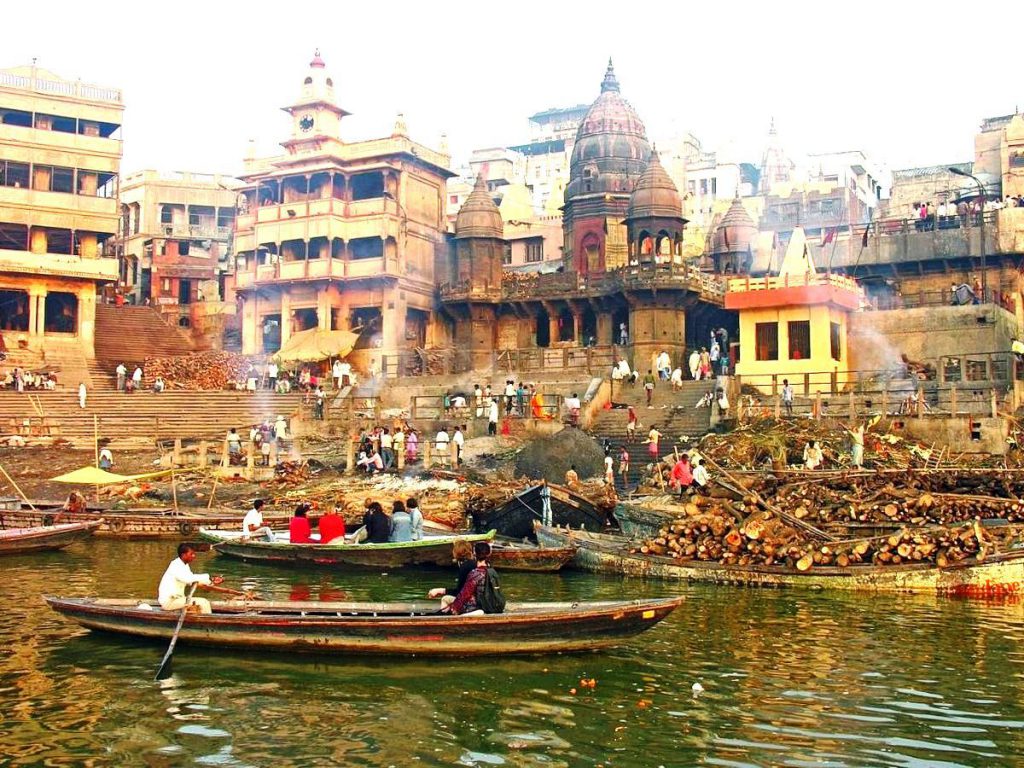 Day 5: Khajuraho – Varanasi: Get up very early and go for a tour of the temples in the early morning when the sun rises.

Return to the hotel, have breakfast and get ready to check out from the hotel. Drive to the airport and catch flight to Varanasi.

Have dinner in the evening. Overnight in Varanasi.

Day 6: Varanasi: Get up early in the morning and after breakfast go to the banks of River Ganges. Take a boat and cover all the ghats slowly, looking at the different temples and old buildings all along. Keep special focus on some of the most famous ghats – Dasaswamedh Ghat, Manikarnika Ghat, Harischandra Ghat, Assi Ghat, Shivala Ghat, Man Mandir Ghat, Darbhanga Ghat, Ahilyabai Ghat and Kedar Ghat.

Visit the famous Kashi Viswanath Temple (open to Hindus only) and have a look at Manikarnika crematorium. Close to Manikarnika Ghat is the Nepali Temple, a temple known for its unique Nepalese architectural style.

ry out the traditional thandai. You can also try some traditional food items in the small old restaurants located. Later, move on to see the traditional art of making Banarasi Sarees – something which is a gift for all new brides. You can buy one if you want to.

Go on to visit Goddess Durga Temple, where locals visit in big numbers and you can see lots of monkeys roaming around getting fed by the locals. Sankat Mochan Hanuman Temple and Tulsi Manas Temple are also quite famous temples, located nearby.

Return and visit the ghats again and watch the serene aarti ceremony. Have dinner at one of the restaurants. Overnight in Varanasi. 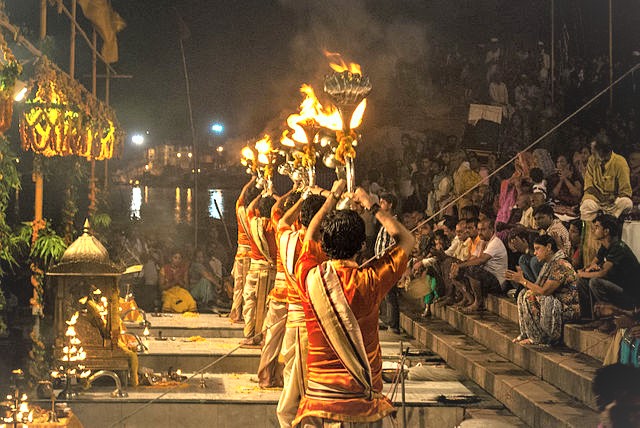 Day 7: Varanasi – Bodhgaya: After breakfast, drive to Sarnath, around 10km from Varanasi City. Sarnath is the place where Buddha delivered his first sermon in a Deer Park. This is why Sarnath is a much revered in Buddhism.

There are several Buddhist monuments and edifices at Sarnath. Besides the Deer Park, the monuments include Dhameka Stupa, Ashokan Pillar, Ashokan Lion Capital (the national emblem of India) and Mulagandhakuti Vihara. Archaeological Museum, though a small museum, is worth visiting. Also spend some time at the Tibetan Temple, located alongside the Deer Park.

Return from Sarnath and check out from the hotel. Proceed for Bodhgaya, a drive of for around six hours. Bodhgaya is a historic place where Buddha is supposed to have attained  supreme enlightenment meditating under the Bodhi tree.

Check into a hotel on arrival in Bodhgaya. 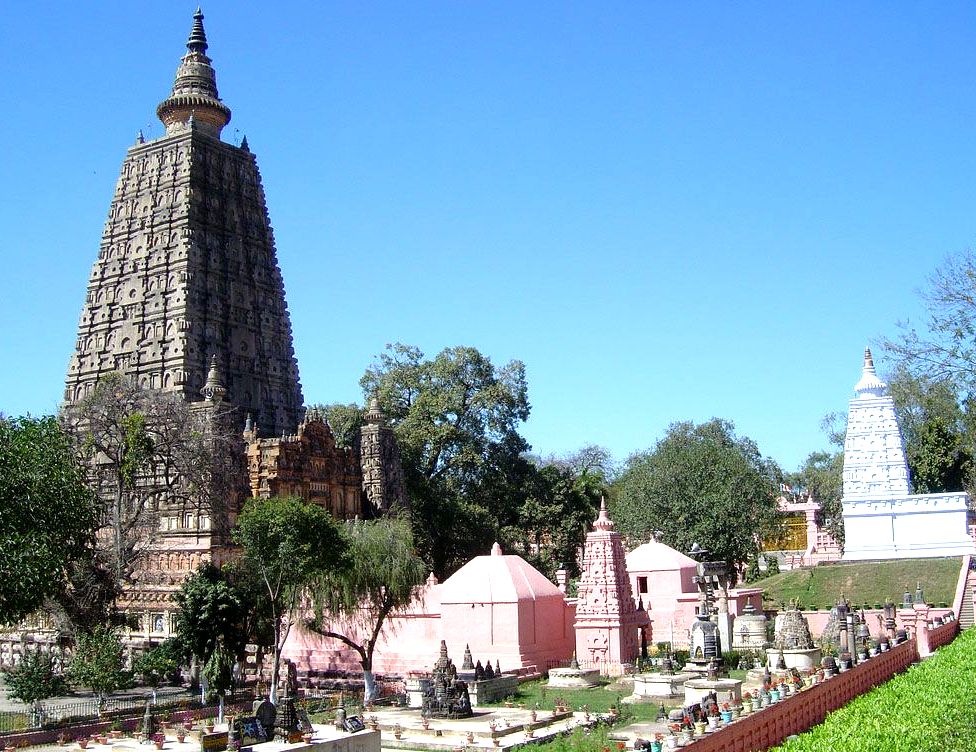 Day 8: Bodh Gaya – Nalanda – Rajgir – Bodh Gaya: After an early breakfast go on to visit Mahabodhi Temple, the historic temple built to pay respects to the place where Buddha attained enlightenment. Its origin is said to be more than 1500 years old. Have a look at the Bodhi Tree under which Buddha meditated. The tree existing now is said to be at the same place where original tree existed before.

Muchalinda Lake is just close by the main temple. Go there and feed thousands of catfish in the lake.

Go on a tour of Nalanda and Rajgir. Nalanda is a drive of a little more than two hours. Nalanda is famous for its university ruins. The ruins show how impressive old Nalanda University might have been and how it attracted students from far off places. Take a guided tour of these ruins and understand the life of students during those times.

Later, go and visit Nalanda Archaeological Museum. It has a good collection of ancient manuscripts and Buddhist statues.

From Nalanda, drive to Rajgir – a drive of just half an hour. Rajgir, called Rajgriha in ancient times, was the capital of Magadh kingdom under Bimbisara and Ajatshatru. Surrounded by seven hills, Rajgir is a must visit for anyone interested in learning about the glorious history.

Day 9: Bodhgaya – Gaya/Patna airport– Onward Destination: Go to Gaya town to Vishnupad Temple situated on the banks of River Falgu. Return to the hotel, have breakfast. Check out from the hotel in Bodhgaya as per time of your flight. Drive to Gaya airport to proceed for onward destination.

If flight is not available from Gaya, drive to Patna – a drive of around four hours. Catch the flight from there for your onward destination.

Treat yourself to customized and fixed departure tour packages with Excursion2India!

Please feel free to write to us at sales@excursion2india.com.

Please let us know in your WhatsApp message to us if you want join our WhatsApp Group. Those in our WhatsApp group will get to know about our fixed departure tours in advance and may avail possible early bird discounts.