Meandering rivers and waterfalls, architecturally rich forts, stunning ravines and low mountain ranges waiting to be discovered, Madhya Pradesh awaits you. Popularly called as the “heart of India”, Madhya Pradesh is widely recognized for its rich cultural heritage and natural beauty. The thick lush green forests, rich flora and fauna and pristine beauty of Madhya Pradesh attract tourists from various parts of the world. Treat yourself to a memorable trip in the heart of India with Excursion2India Madhya Pradesh Tour Packages  from Kolkata, Bangalore or Delhi or else where and take back lifetime memories. 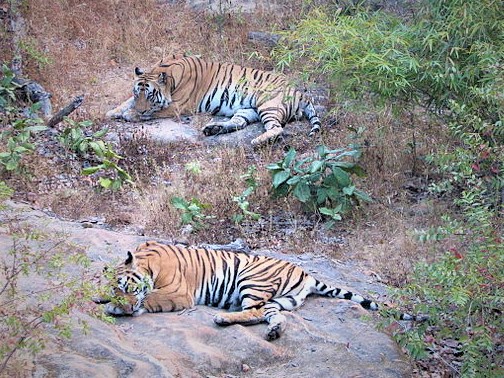 Surrounded by the Vindhyas, the Bandhavgarh National Park is home to the majestic Royal Bengal Tiger. Declared as a national park in the year 1976, Bandhavgarh was the private hunting ground of the Maharaja of Rewa.

One of the most famous Buddhist shrines in India, Sanchi Stupa is known for its marvellous art and architecture. It was built by Emperor Ashoka in the honour of Lord Buddha. The Sanchi Stupa is another UNESCO Heritage Site in Madhya Pradesh.

Some other places of interest include: 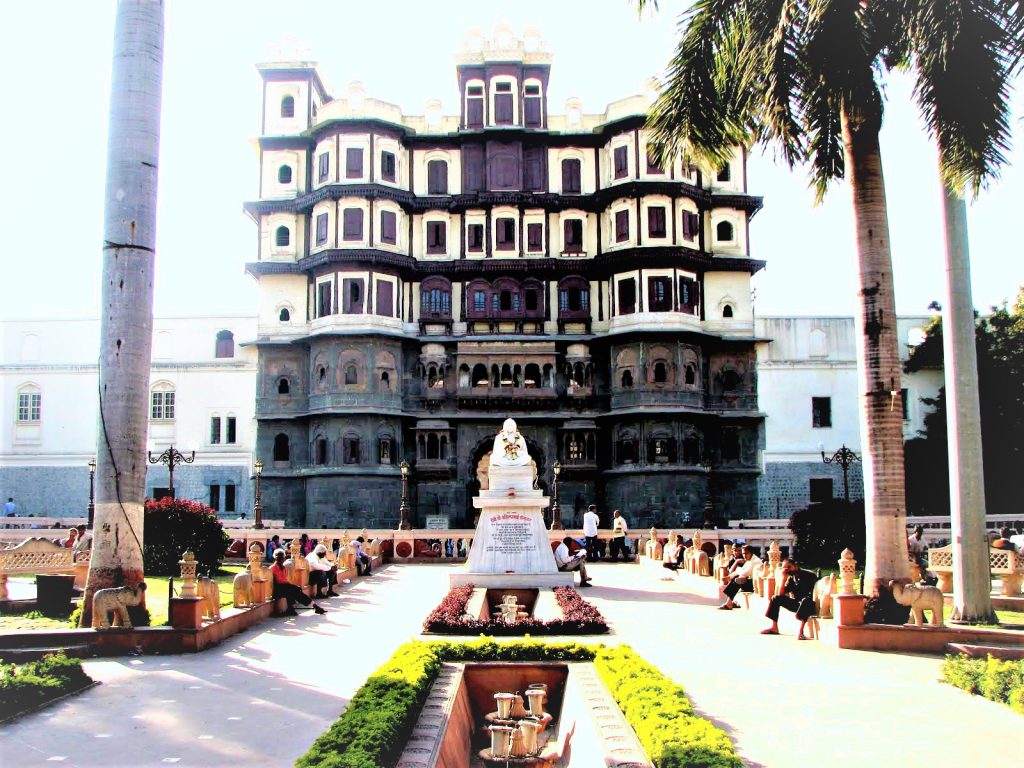 Day1: Indore – Mandu: Arrive at Indore airport. Straight away go for a sightseeing tour of the Indore. Must visit places in Indore on a short trip are Khajrana Ganesh Mandir, Shri Omkareshwar Jyotirlinga, Kanch Mandir, Sarafa Bazar and Rajwada. Towards the late afternoon leave for Mandu. This is a drive of a little more than two hours. Check into a hotel on arrival in Mandu, a historic ruined town situated in Dhar district.

Have a nice dinner at your hotel or at one of the restaurants. Overnight in Mandu.

Day 2: Mandu: After breakfast, embark on a full day sightseeing of Mandu. Mandu, what many believe, had India’s biggest fort. The walls of the Fort measured some 37km and were punctuated by 12 gateways. What is left today are ruins, with some impressive buildings standing intact. There are a number of palaces, mosques, Jain temples of the 14th century and other buildings still standing. The oldest mosque within the Mandu Fort Area dates from 1405.

Visit the Jahaz Mahal or ship palace, situated between two artificial lakes. It is one of many structures which made up the royal palace complex. The complex also houses the Hindola Mahal, which might have served as an audience chamber. There are a number of other structures around the palace complex. These include Hoshang Shah’s Tomb, India’s first marble structure and one of the finest examples of Afghan architecture. Jami Masjid, inspired by the great mosque of Damascus, is another striking structure.

Have a look at Rewa Kund, a reservoir built by Baz Bahadur, for the purpose of supplying water to Rani Roopmati’ Pavilion. This pavilion was built in sandstone. It is said from the pavilion the queen could see Narmada River, a river she revered. Situated below Rani Roopmati’s Pavilion is Baz Bahadur’s Palace.

Return to hotel after a tour of these historic buildings. Enjoy your dinner. Overnight in Mandu.

Day 3: Mandu – Dhar – Mandu: After breakfast start for a full day excursion of Dhar. Dhar is around one hour drive from Mandu. Visit the popular attractions of Dhar. These include Dhar Fort and Bhojashala Mosque. Both the attractions are known for their historical importance. Also visit Lat Masjid, built by Dilawar Khan in 1405. Jhira Bagh Palace, built in the 1860s, and presently run as a heritage hotel, is also a nice place to visit. Enjoy sightseeing and then head back to Mandu. Have your dinner. Overnight in Mandu.

Day 4: Mandu – Maheshwar: Check out after breakfast and head to Maheshwar, a drive of a little more than one hour. Check into a hotel on arrival in Maheshwar, an ancient temple town situated on the banks of River Narmada in Khargone district.

After relaxing a bit start exploring the town. Maheshwar is now regarded mainly as a pilgrimage center where tourists flock from across the world. They come to have a look at the stunning Maheshwar Fort – which stands towering over Narmada River – numerous temples and the picturesque Ghats.

Visit Holkar Fort which is also referred to as Queen’s Fort. This was the opulent palace of Rani Ahilyabai Holkar. It served as her administrative headquarter during her reign. Have a look at Shri Raj Rajeshwara Temple. This has several carvings and sculptures that are beautiful to look at. Jaleshwar Temple, located on the banks of Narmada River, dedicated to Lord Shiva, is also a nice place to see. Indulge in some boating in River Narmada; there are some 28 ghats in Maheshwar.
Have a nice dinner. Overnight in Maheshwar.

Day 5: Maheshwar – Omkareshwar: Check out after breakfast and drive to Omkareshwar – a drive of nearly two hours. Check into a hotel on arrival in Omkareshwar. Afterwards, go on to explore Omkareshwar. The place, situated on the banks of River Narmada, is known for its temples. Most famous of these is Omkareshwar Temple, a jyotirlinga dedicated to Lord Shiva. The temple is situated on an island called Mandhata, located at the meeting point of the rivers Narmada and Kaveri.

Go for a circumlocution or parikrama of Omkareshwar Temple,. Total distance of this parikrama is around 8km and takes more than three hours. However, doing this one can have fantastic views of the confluence of rivers Narmada and Kaveri and many more temples, including the much revered Mamleshwar Temple. You can do this parikrama on a boat as well.

Go and visit Sri Govinda Bhagavatpaada Cave. It is said the famous Shankaracharya took some spiritual education and guidance from the saint Govinda Bhagavatpaada right here in this cave. The 11th century built Kedareshwar Temple is an important shrine of Madhya Pradesh and is quite an attraction for devotees and tourists. One should also make a visit to architecturally interesting Siddhanath Temple.

Have dinner after going around the temples and the town whole day. Overnight in Omkareshwar.

Badi Jheel, Bhopal: Upper Lake in Bhopal is a must visit place

Day 6: Omkareshwar – Bhopal: Check out from a hotel in Omkareshwar after breakfast and drive to Bhopal, capital of Madhya Pradesh. Check into a hotel on arrival in Bhopal after a longish drive of nearly seven hours from Omkareshwar.

After relaxing a bit in the hotel go out to have a cursory look at main attractions of Bhopal. Visit Badi Jheel, the big lake, where you can spend quite hours looking out at the lake. You can go boating as well. Try some food at the restaurants with lake view. You can even go for dinner at one of these restaurants.

You can visit Lakshmi Narayana Temple afterwards, if you want. Overnight in Bhopal.

Day 7: Bhopal: Get up early and after breakfast embark on a full day sightseeing of Bhopal. Drive an hour or so to reach Sanchi Stupa, an ancient stupa made on a hillock. The Stupa has been kept well for a long time. Sanchi Stupa has great architecture and amazing intricate carvings on the stones.

Return from Sanchi Stupa trip and visit Indira Gandhi Rashtriya Manav Sangrahalaya – the National Museum of Mankind, an anthropology museum presents an integrated story of the evolution of man and culture in India.

Also visit Madhya Pradesh Tribal Museum, a museum which preserves valuable information about different aspects of various tribes of Madhya Pradesh. Right in front of the Tribal Museum is the State Museum. One should visit that as well.

Towards the evening you can visit DB City Mall. Have a nice dinner in the evening. Overnight in Bhopal. 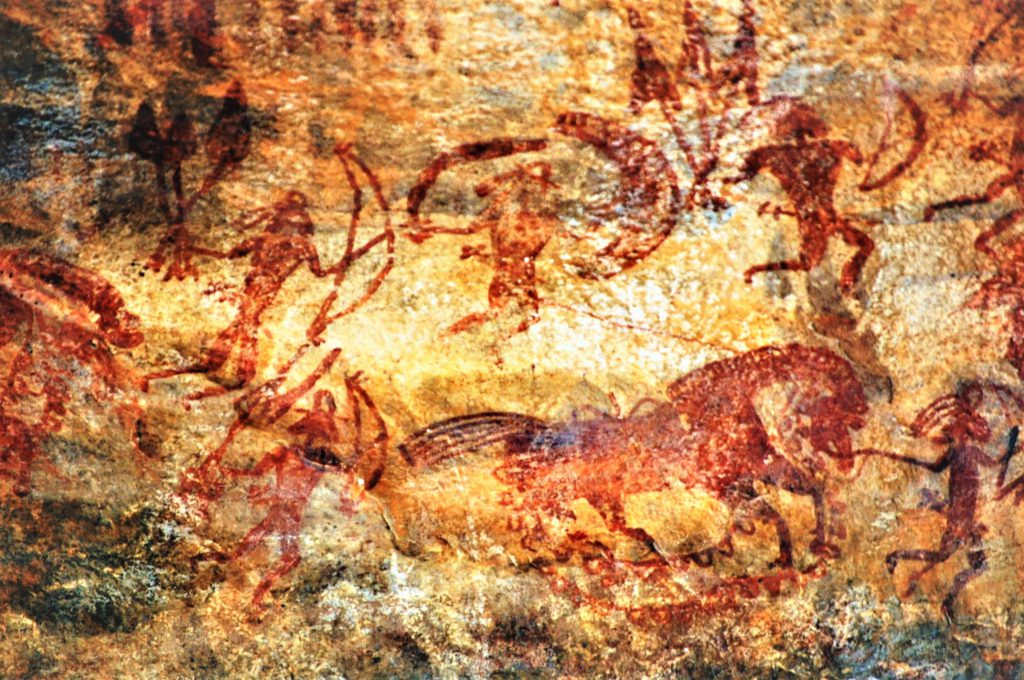 One of the Bhimbetka Caves Painting: These caves have rare prehistoric paintings

Day 8: Bhopal: Start for breakfast for yet another full day excursion of Bhopal. Start with a tour to Bhimbetka, a pre-historic site where there are more than 15 rock shelters containing paintings from Paleolithic to Neolithic periods. This is a must visit to understand the history of human beings.

On the way back to Bhopal, go and visit Bhojpur, an archaeological site famous for its magnificent remains of Shiva Temple and Cyclopean dam. Shiva Temple, called Bhojeshwar Temple, is often referred to as Somnath of the East. The lingam in the sanctum rises to an awe-inspiring height of 7.5 feet with a circumference of 17.8 feet. Due to unknown reasons, the temple construction was never completed and the earthen ramp used to raise it to some level still stands. Also incomplete with a similar stone raising ramp is a Jain shrine that stands close to the Bhojeshwar Temple. This Jain temple has a statue of Mahavira and two of Parsvanath.

Return to Bhopal late in the afternoon. If time permits one should go and visit Taj ul Masjid, supposed to be the largest mosque in India.

Have a nice dinner in the evening. Overnight in Bhopal.

Day 9: Bhopal – Onward Destination: Check out after breakfast and drive to airport and catch connecting flight to your desired destination.

Treat yourself to customized tour packages with Excursion2India!