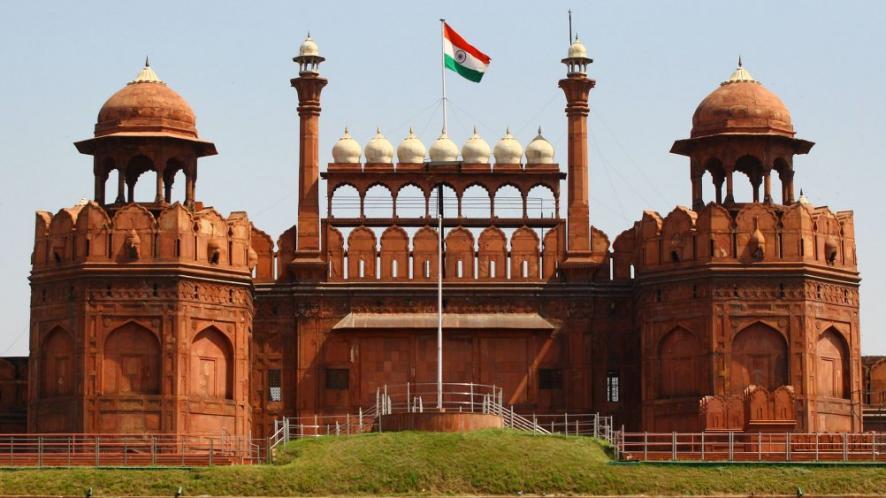 Red Fort, Delhi. This is from where Indian Prime Minister hurls National Flag every Independence Day

Day 1: New Delhi: Arrive early in morning in New Delhi and drive straight to hotel. Relax for some time, get fresh and have a sumptuous breakfast. Later, embark on a sightseeing tour of New Delhi. Start with Qutab Minar and other ancient and medieval period monuments surrounding it. Together they have also been included in the list of UNESCO World Heritage sites. Qutab Minar is some 73 meters high and a symbol of the Delhi Sultanate period. Other famous monuments in the Qutab Minar complex include the Iron Pillar of Delhi, Quwwat-ul-Islam Mosque, Alai Darwaza, the Tomb of Iltutmish, Alai Minar, and Ala-ud-din’s Madrasa and tomb.

Afterwards, go and visit India Gate, a war memorial dedicated to the soldiers who lost their lives during First World War and Third Anglo-Afghan War. Take a visit to Rajpath, a memorial of Mahatma Gandhi. Afterwards, visit Jama Masjid, a mosque built by Shah Jahan in the mid 17th century. Take a paddle rickshaw ride in the old city. See the narrow lanes where business is still carried out in big volumes. Get a fair idea of how things were during the Mughal and later during British period. There are Sikh temples and Jainese temples as well in Old city. Explore them.

Day 2: New Delhi – Jabalpur – Bandhavgarh National Park: Have an early breakfast and drive to the airport, and catch the flight to Jabalpur. Drive to a restaurant in the city and have lunch. Afterwards, drive to Bandhav National Park. Check into a resort. Get acclimatized to the conditions. Relax and have a walk in the resort or outside. Have a nice dinner. Overnight at the resort in Bandhavgarh. 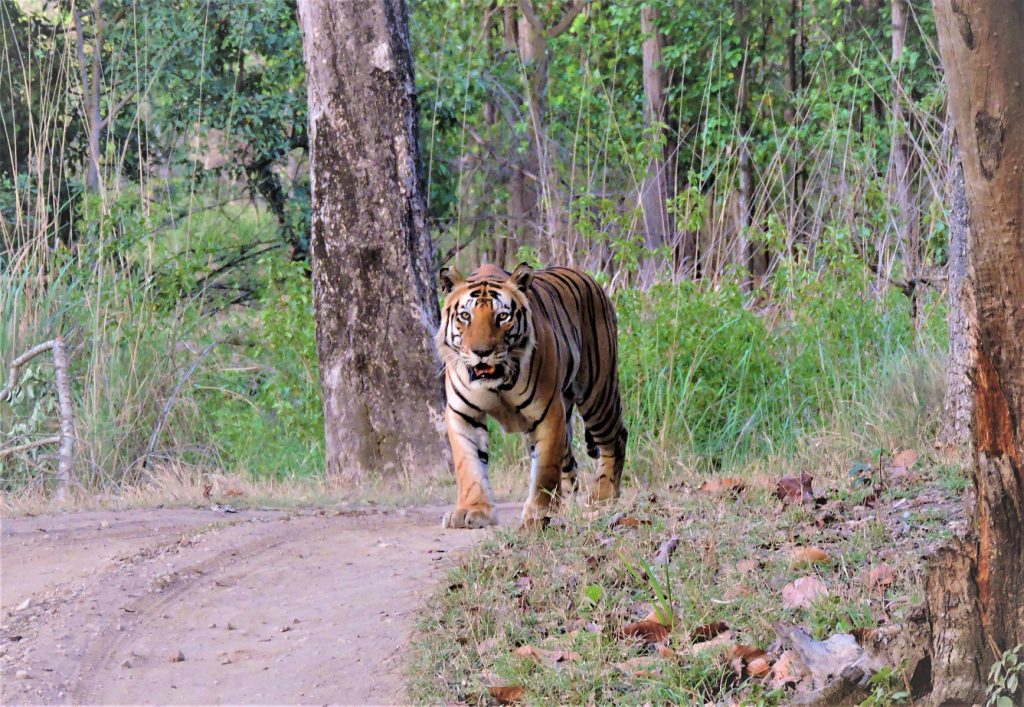 A tiger as seen in Kanha National Park, Madhya Pradesh. This is one of the most famous forests for tigers in India

Day 3: Bandhavgarh National Park: Get up very early in the morning and go to the forest in an open jeep to enjoy the morning safari. Look out for the tigers, though there are chances you can see even leopards. After finishing the safari return to the resort and have a nice breakfast. Relax for some time. Get fresh. Have lunch during day time and after a while leave for afternoon safari. Return in the evening and relax with some drinks. Have a nice dinner. Overnight at the resort in Bandhavgarh.

Day 4: Bandhavgarh – Kanha National Park: Go for a morning safari. Return, have breakfast and after getting fresh, leave for Kanha National Park. This is a drive of around six hours. Check into a resort in Kanha near Kanha or Kisley gate. Enjoy a nice dinner and retire to your room for a good overnight sleep.

Day 5: Kanha National Park: Enjoy morning and afternoon safaris. Have your breakfast, lunch and dinner at the resort.

Day 6: Kanha National Park – Raipur – Kolkata: Go for a morning safari. Return, have breakfast and leave for Raipur. This is a drive of around five hours. Catch the flight to Kolkata. Check into a hotel on arrival in Kolkata. Settle into your hotel. Have a walk on the streets in crowded Kolkata. Have dinner at one of the restaurants. Overnight in Kolkata. 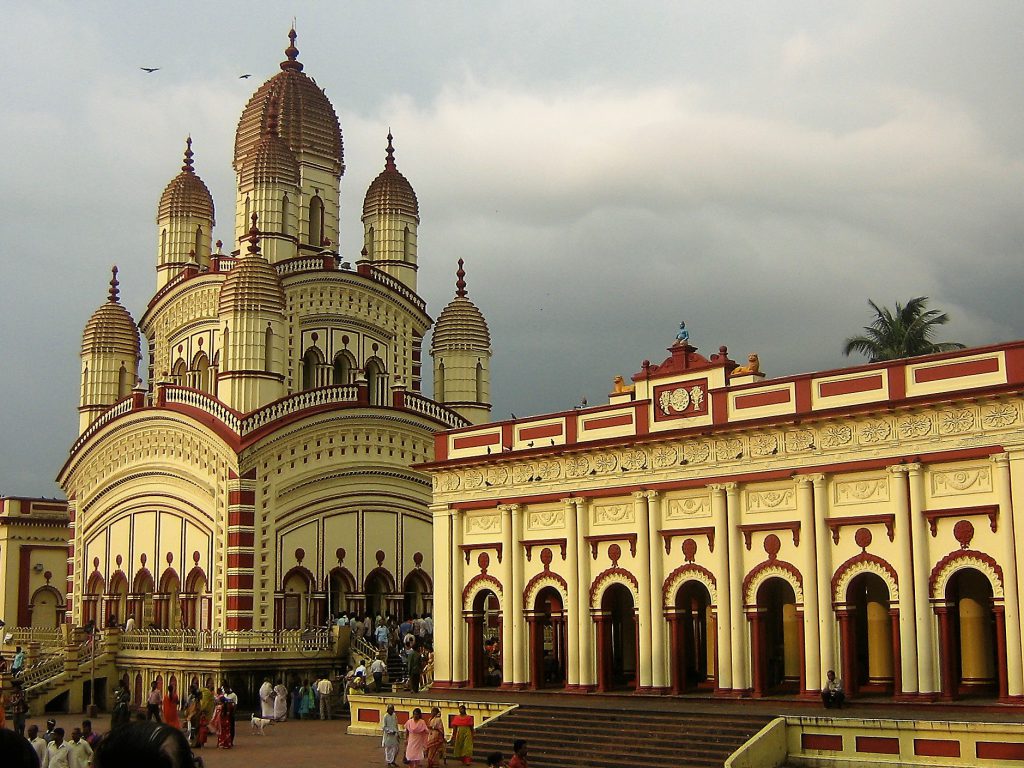 Day 7: Kolkata: After an early breakfast embark on a full day exploration of the city. Start with the Flower Market. This is a unique place, supposed to be the largest flower market in Asia. You can feel amazed o see the vivid kinds of flowers coming to the market every morning. Afterwards, go and visit a Jain Temple, built by a jeweler several years ago. This temple is known for its rich use of gems and jewelries. If interested, you can go and visit potters’ colony to see potters at work on making idols for different festivals.

After lunch you may choose to visit Victoria Memorial and get a glimpse of the history of how Kolkata came into being. Later, you can go and visit Dakshineswar Temple. This temple, much revered by Hindus in Kolkata, is the place where the famous saint Ramkrishna Paramhans used to worship. If interested, you can visit Belur Math, headquarters of the Ramakrishna Math and Mission. This organization was founded by Swami Vivekananda, a famous modern thinker and disciple of Ramkrishna.

Have a nice dinner at one of the many restaurants near your hotel. Return to the hotel and retire to your room after a hectic day out. Overnight in Kolkata.

Day 8: Kolkata – Bhitarkanika National Park: Get up leisurely in the morning. Have a nice breakfast and have the first half of the day at leisure. Check out from the hotel and you can have a nice early lunch at one of the restaurants. Drive to the railway station and catch the train to Cuttack. Drive straight away to Bhitarkanika National Park and check into Estuarine Village Resort. Have a delicious dinner. Overnight at Estuarine Village Resort, Bhitarkanika.

Day 9: Bhitarkanika National Park: Set out for a full day excursion to Bhitarkanika National Park after breakfast. Get into the forest department approved boat and go into mangrove creeks to enjoy the beauty of the forests. Look for the large salt water crocodiles basking in the sun on the banks of the river channels in the creeks. There are a large number of bird varieties you can notice. Keep a special focus on the variety of kingfisher birds. Different stork variety birds, parakeets, darters, cormorants, mangrove petta, different heron varieties and ibis are found in good numbers. Apart from spotted deer you can also find wild boars and monitor lizards. If you are lucky you can also spot leopard cats, fish cats, wild cats, and hyenas.

Return to the resort and have lunch. In the afternoon, go on to visit Interpretation Center–cum-forest museum. This is quite informative even though it is small in size. Afterwards, go on to visit some villages located around the National Park. Look at the village school, and experience their style of living first hand.
Have delicious dinner and retire to your rooms. Overnight at Estuarine Village Resort, Bhitarkanika. 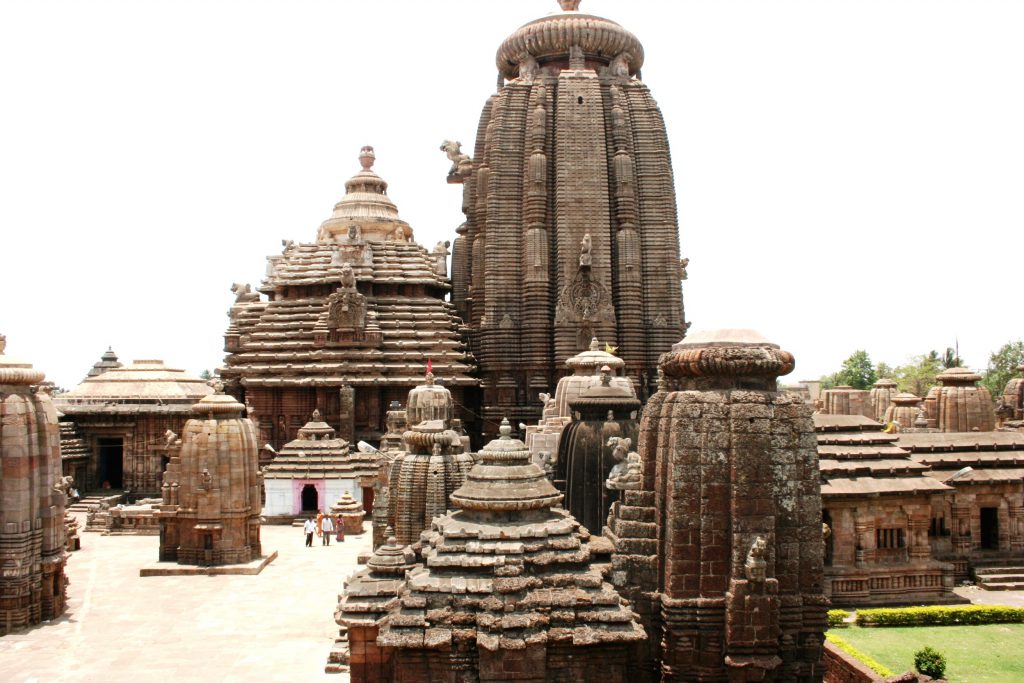 Day 10: Bhitarkanika – Bhubaneswar: Check out after breakfast and drive to Bhubaneswar. Check into a hotel on arrival in Bhubaneswar. After lunch go and visit Nandankanan Zoological Park. This is one of the best in India. Highlight of the Park is white tiger safari. This is one of the rare zoos in India to have Orang-Utan, Indian Pangolin, Spotted Munia, and Burmese Python. Overall, there are 101 enclosures within the Park.

Afterwards, in the evening, go and visit Lingaraj Temple (non-Hindus not allowed inside temple), a temple dedicated to Lord Shiva, and built in the last decades of the 11th Century.

Have dinner at one the city restaurants. Overnight in Bhubaneswar.

Day 11: Bhubaneswar – Konark – Puri – Bhubaneswar: Have breakfast in the morning and set out for Konark, a drive of around 1.5 hours. Konark is famous for the Sun Temple, listed among the world heritage sites. The massive temple, partially in ruins now, was built in 1255 by Narasimhadeva I of Eastern Ganga Dynasty. This is listed among UNESCO World Heritage sites.

After full sightseeing of Konark, drive to Puri – a drive of around one hour. Puri is famous for its Jagannath Temple, a highly revered temple for Hindus. Go on to visit the temple (non-Hindus are not allowed inside), built in the 12th Century by the Eastern Ganga dynasty ruler Anantvarman Chodaganga Deva.

Have lunch in Puri and take a stroll on the beach in Puri. Look at some other temples and villages around Puri. Drive back to Bhubaneswar. Just before entering the main city there is Dhauli, the site where the famous Magadh ruler Ashoka fought a violent war against Kalinga. It is said seeing so much blood he was filled with remorse and took to non-violence and started practicing Buddhism. One can see Dhauli Rock Edict of Ashoka here. There is a Mahashanti Stupa built here on a hillock as well.

Return to Bhubaneswar. Have a nice dinner at one of the restaurants. Overnight in Bhubaneswar.

Day 12: Bhubaneswar – New Delhi – Onward Destination: Check out from the hotel after breakfast and drive to airport to catch flight to New Delhi. From New Delhi catch a flight to your onward desired destination.

Treat yourself to customized and fixed departure tour packages with Excursion2India!

Please feel free to write to us at sales@excursion2india.com.

Please let us know in your WhatsApp message to us if you want join our WhatsApp Group. Those in our WhatsApp group will get to know about our fixed departure tours in advance and may avail possible early bird discounts.