10 Best Monuments Everyone Must See In India

Indian history witnessed various dynasties at different times. Imprints of different rulers and different dynasties can be seen in the kind of monuments they built and have left behind. Some of those have stood the wrath of times to survive in good shape while many others have crumbled – some more, some less.

These are mostly based on our knowledge and experience of these monuments. But we have leaned heavily on views expressed by our guests visiting these over the years.

Built on an earlier mud fort site, Golconda Fort rose to prominence in the 16th Century when Quli Qutub Shah became independent from the Bahmani Sultanate in 1518.

The Fort was expanded to its full form over a period of several years. It is known for its amazing acoustic affects. Someone clapping at a certain point below the entrance dome can be heard at the highest point in the Fort almost a kilometer away.

Mughal ruler Aurangzeb annexed it in 1687 after a long seize of over nine months. In present day one can enjoy and learn the history of Golconda seeing the light and sound show in the evening. 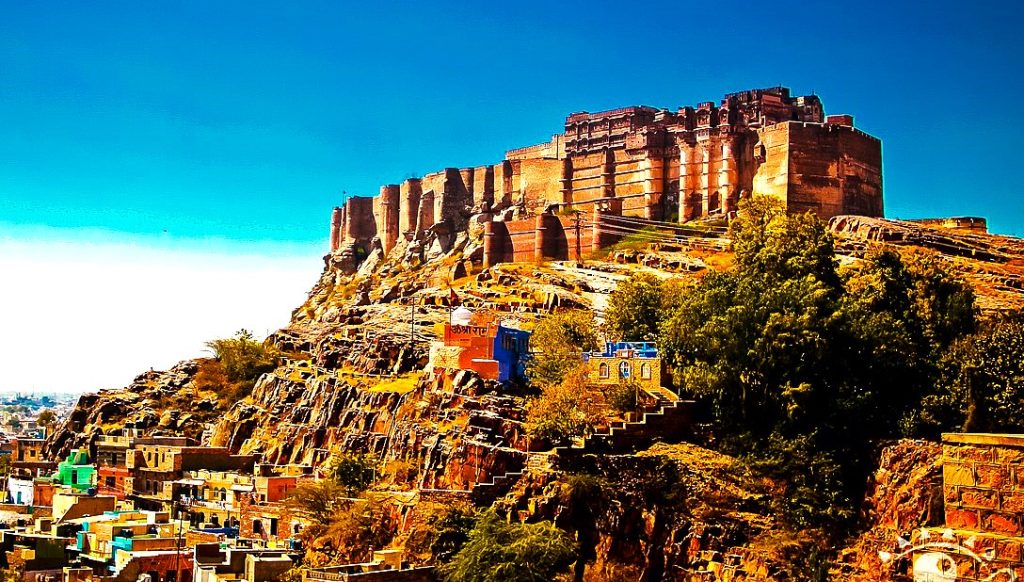 Built by Rao Jodhpur, the founder of Jodhpur in the 15th century, Mehrangarh Fort is probably the largest fort in Rajasthan.

Mehrangarh, which literally means ‘fort of the sun’, had close alliance with the Mughals till the middle of the 17th Century. Afterwards, Jodhpur became more or less an independent kingdom. The most popular landmark of Hyderabad, Charminar was built towards the end of the 16th Century by the Qutub Shahi ruler Muhammad Quli Qutb Shah.

As per Archaeological Survey of India, the Charminar, which literally means Four Towers, was erected by the ruler to commemorate the end of plague.

The two-storied monument, as the name suggests, has indeed four arches facing all the four directions. One can see the beautiful Mecca Masjid from its balconies on the top floor.

There is a small and quaint mosque on the top floor as well. This is supposed to be one of the oldest surviving mosques in Hyderabad.

The famous old market Lal bazaar is close by Charminar and is scene of great activity all day. 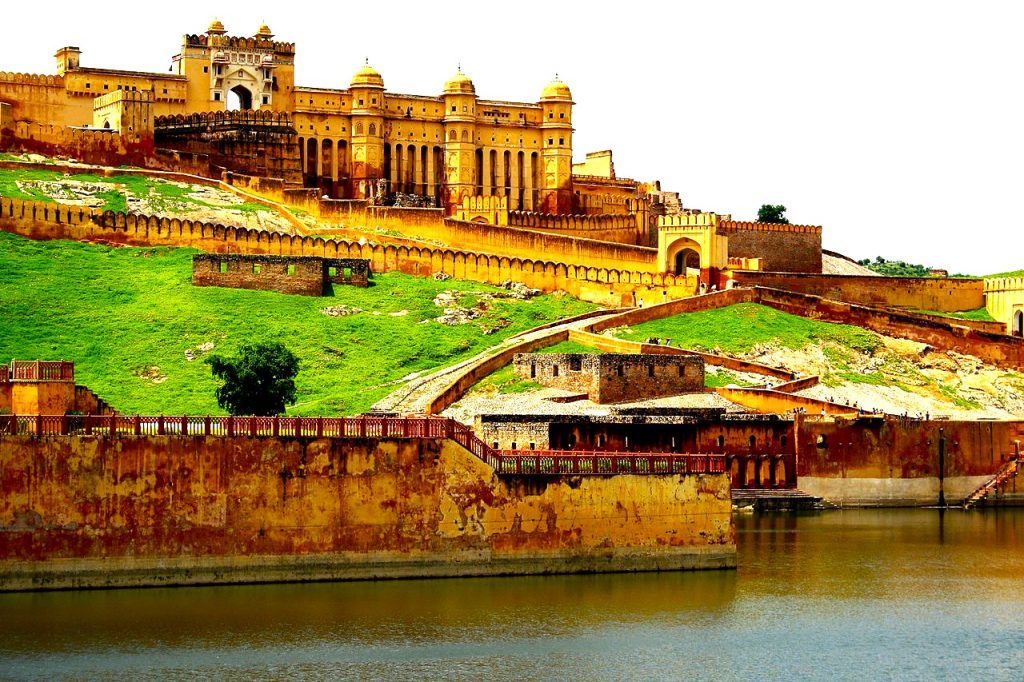 Amber or Amer Fort, located high on a hill, is the principal attraction for tourists in Jaipur. The Fort, built mainly of red sandstone and marble, is laid out on four levels, each with a courtyard.

It served as the capital of the Kachwaha rulers till 1727, when the capital was shifted to Jaipur, which was built by Sawai Jai Singh II.

Special attractions of the Fort are – Diwan-e-Aam (Hall of Public Audience), the Diwan-e-Khas (Hall of Private Audience), the Sheesh Mahal (mirror palace), Jai Mandir, and the Sukh Niwas, where a cool climate used to be artificially created by winds that blew over water cascade within the palace.

Amber Fort (along with other hill forts of Rajasthan) is one of the UNESCO World Heritage sites. 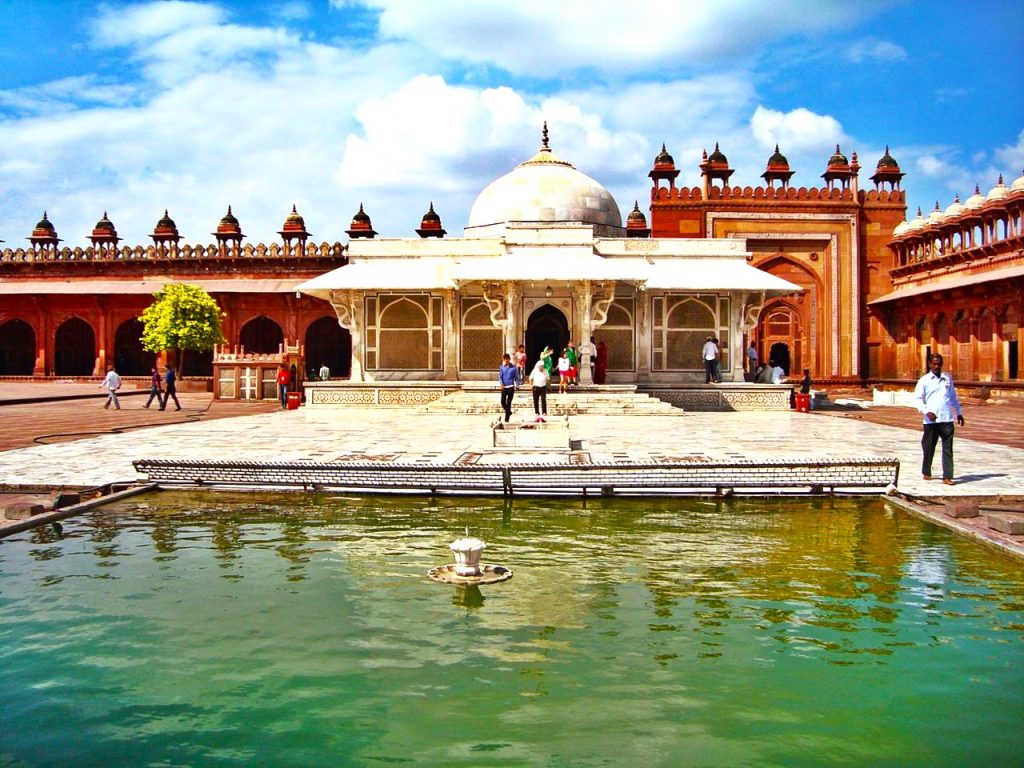 Fatehpur Sikri: Situated near Agra, this was the first capital of Akbar

Situated near Agra, Fatehpur Sikri was founded by the Mughal Emperor Akbar. It served as the capital of the Mughals from 1571 to 1585.

Fatehpur Sikri was built to honour the Sufi Saint Salim Chishti. It was a planned city with mosque, harems, palaces, private quarters and other utility buildings.

The most famous of the buildings include the Buland Darwaza, Tomb of Salim Chishti and Jama Masjid.

Fatehpur Sikri was, however, abandoned almost immediately after its completion in 1585, largely due to the paucity of water in the adjoining areas.

Parts of the city still remain and become a great place to visit for tourists and those who are interested in discovering facets of Indian history. 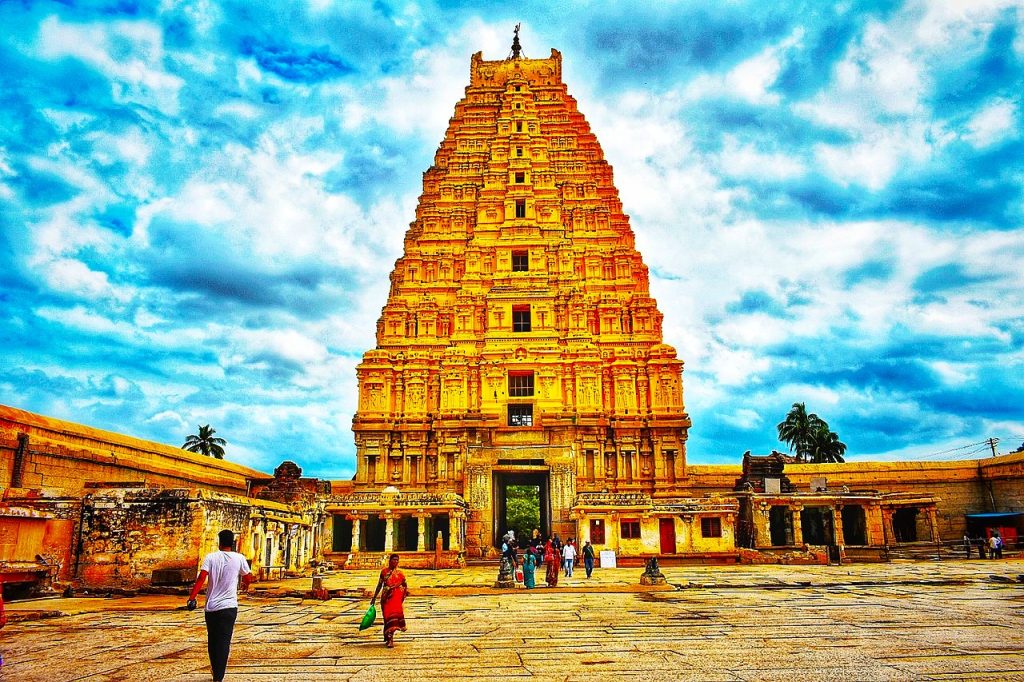 Hampi, a flourishing city from the 14th to 16th Century, served as the capital of Vijayanagar Kingdom. Regarded as the largest city of its time, Hampi, located on the banks of River Tungabhadra, was the epitome of architectural wonders, and regarded as a cultural and economic hub.

There were seven lines of fortification in Hampi. The seventh and the innermost fortification enclosed the main city and is still the best preserved.

The monuments here can be divided into religious, civil and military buildings. All the monuments of Hampi together have been listed together on the UNESCO World Heritage sites.

Some of the famous monuments of Hampi are Virupaksha Temple, Hazara Rama Temple Complex, and Lotus Mahal.

The city was destroyed after Vijayanagar lost in a battle despite its huge military. 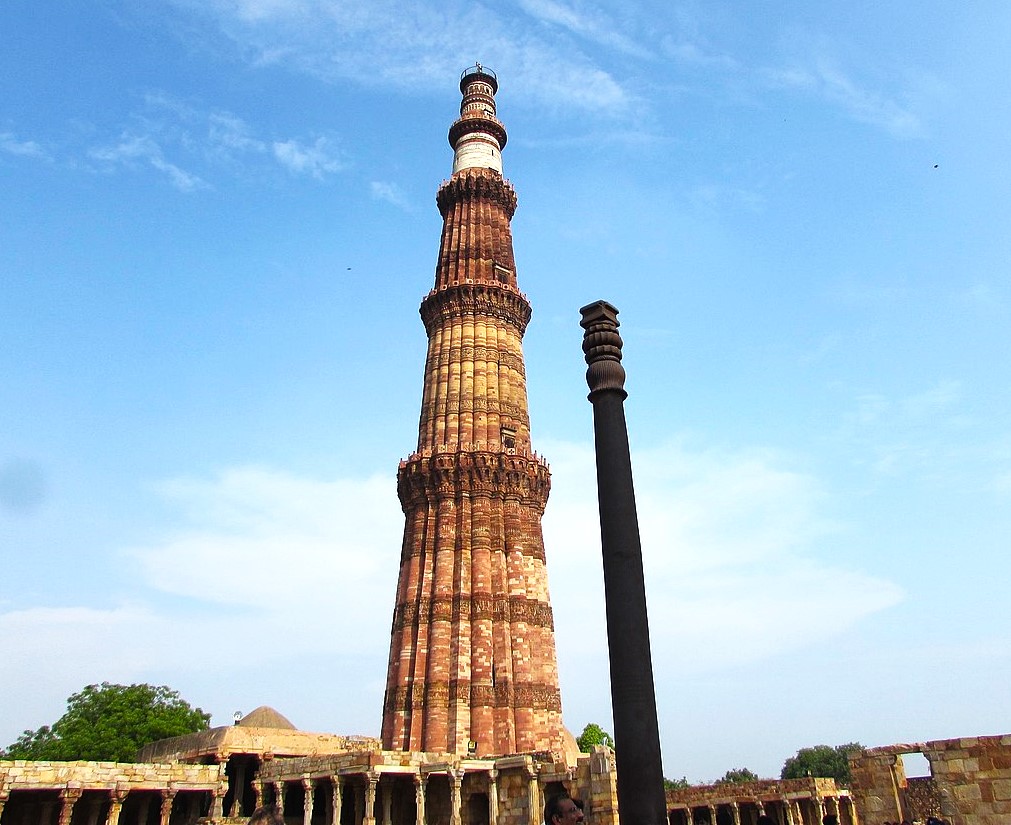 Regarded often as the tallest tower in India, Qutub Minar, standing at 72 meters, is on the list of UNESCO World Heritage sites.

Construction of Qutub Minar started in 1199 under Qutub-ud-Din Aibak but was carried on by two other Sultanate rulers Iltutmish and Firoz Shah Tughlaq.

There are several other smaller monuments nearby Qutub Minar. The most famous of these are Iron Pillar and Tomb of Iltutmish. 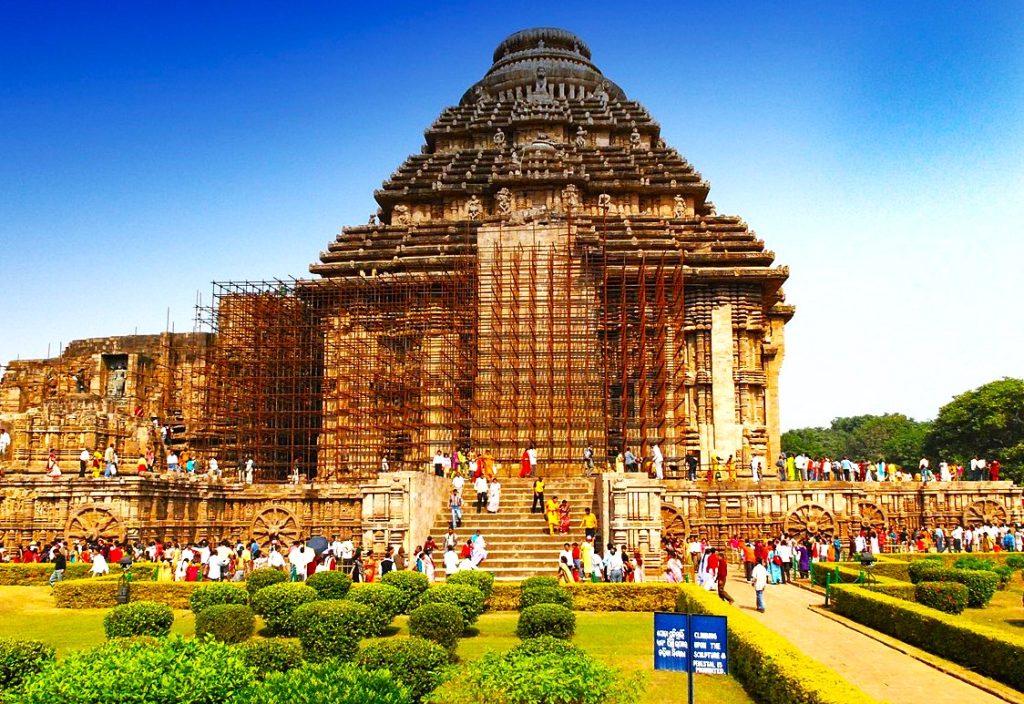 Built by King Narasimhadeva I of Eastern Ganga Dynasty in the 13th Century, Sun Temple at Konark in Odisha is among one of the UNESCO World Heritage sites.

It was built in the form of a giant ornamented chariot of Surya, the Sun god. It has elements of the traditional style of Kalinga architecture.

Sun Temple was carefully oriented towards the east so that the first rays of sunrise struck the principal entrance.

The temple was originally built at the mouth of the river Chandrabhaga, but the waterline has receded since then.

Due to the weight of the superstructure (vimana) (70m tall) and weak soil of the area, the main vimana is said to have fallen in 1837. Most impressive of what has remained is the audience hall (Jagamohana), which is about 39 meters tall.

This is a group of beautiful Hindu and Jain temples located in Khajuraho, Madhya Pradesh. Built by the Chandela rulers in the 11th and 12th Century, Khajuraho group of temples is listed among the UNESCO World Heritage Sites.

Historical evidences suggest there were some 85 temples in Khajuraho at one time. But only 20 of these have survived the hammers of weathering and stood firm. Most famous of these are Kendariya Mahadev Temple and Lakshmana Temple.

At present, these temples form the backdrop for the famous Khajuraho Dance Festival every year. 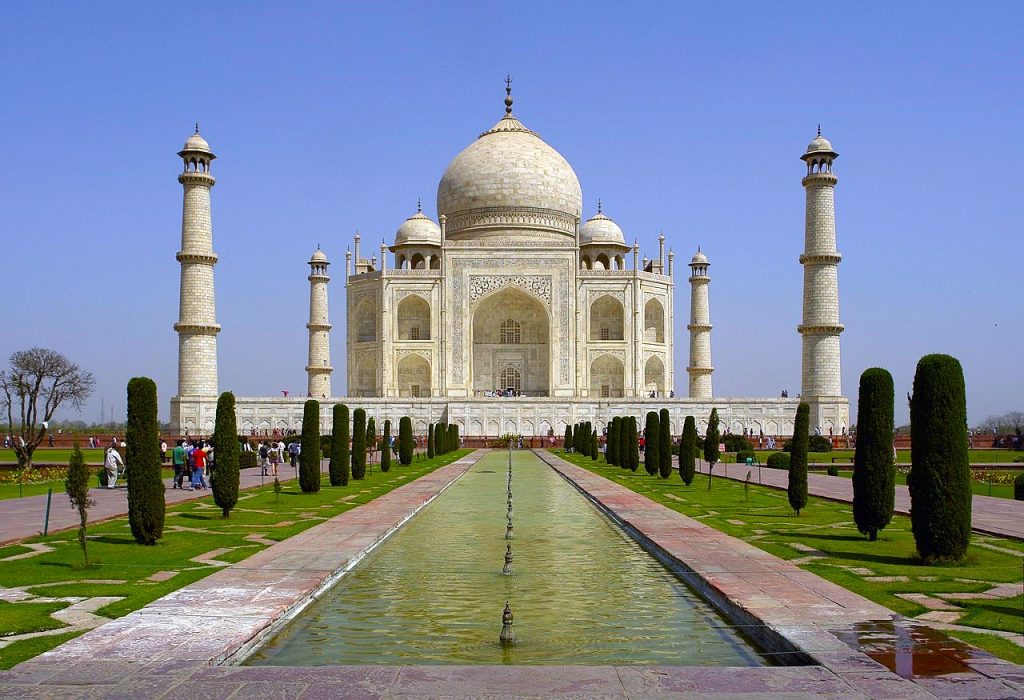 Built on the orders of the Mughal ruler Shah Jahan, Taj Mahal has been voted as one of the new wonders of the world.

Built in white marble, Taj Mahal, which also preserves the tombs of Mumtaz Mahal and Shah Jahan, is one of the most visited monuments in India.

Built as imitation of God’s Heaven on earth, Taj Mahal stands amidst a 42-acre complex on the bank of River Yamuna in Agra.

It is believed the construction of the monument was completed in 1653 and it cost more than Rs32 million then.